Multi-faceted investigation into both human factors and manufacturing helped Radius understand the challenges of users first hand, while defining a clear set of deliverables early in the process. Days of observation into the practices of bioprocessing engineers and technicians revealed user interactions and complications with analogous products, while video footage helped to capture and map workflows.

To better understand the manufacturing requirements, low-fidelity interaction prototypes and a life-sized foam core model was employed at Millipore’s facility, an exercise that allowed Radius and Millipore engineers to collaboratively explore different approaches, gain perspective, and unify the team of users on features needed.

Synthesizing Learning to Develop and Realize a New Opportunity

Exploration deep into the work and process of facility engineers and technicians, and simultaneous investigation of manufacturing requirements, led to a new, more simplified bioreactor system, enabling Millipore not simply to scale an existing product, but to introduce a new market opportunity for the company. 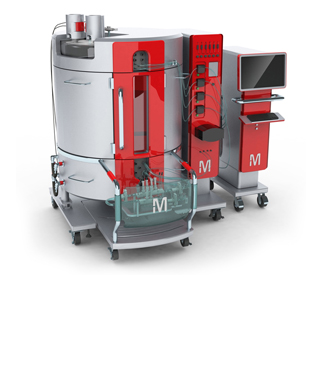 With each use of the system requiring a $40,000 investment, with a possible $1-2M outcome per use, its new usability and foolproof operation promises profit and forges a new emotional connection to the Millipore brand.